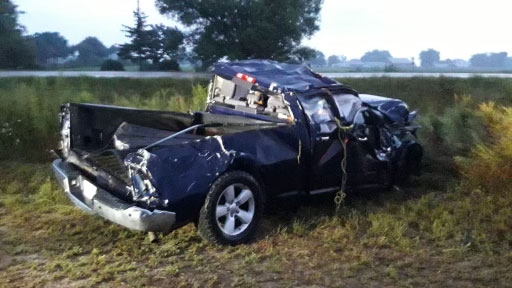 It’s not surprising the number of times I’m asked, “How can you defend that guy?” or, “How does it feel getting criminals off?  Don’t you want safe streets?”  I’m sure if I had the time I could come up with a more eloquent answer about the search for truth, or the duty to ensure that all people are treated equally in the eyes of the law, or the fact that, if we are going to stick people in cages for any period of time and treat them sometimes worse than we treat animals, then we ought to be damn sure that they did what others say they did.  I could say any of that but in the end, it comes down to a system of checks and balances and I defend people because the police don’t always get it right.  They have such great power and we have all seen what great power unchecked can become.  A criminal defence lawyer is the gatekeeper to the justice system.  This recent example of a case we just won at CCD Law is exactly why we defend.

Clay was a country boy.  A muddy boots and skoal ring kind of guy who worked hard and played harder.  He was technically single, but the ex-girlfriend was still willing to tag along and he still enjoyed her company.  She was his ride to the tractor pull in a small, Southern Ontario town that rhymes with “Shembro”.  They took her truck.  Clay gets drunk, as most do in the beer tent of a tractor pull.  He starts chatting with some other people that are there and there may or may not have been some kissing, all perfectly consensual.  This leads to the ex having some issues and taking it out on Clay.  There’s an argument and Clay goes out of the beer tent for a smoke but the bouncers don’t let him back in once his smoke is finished.  He is left out of the beer tent with all his people still inside.  Clay has no memory of anything after the ride to the tractor pull.  The above was recreated through various witness statements.  It is likely a mixture of the booze and the life-threatening head injury that he is soon to suffer but in the end, Clay was in no condition to attempt to recreate the night.  As we will find out, neither where the Ontario Provincial Police.

We catch up next with Clay later in the evening.  He is laying in a farmer’s field.  His legs are bent in the most unnatural of ways.  He is struggling to breathe and certainly can’t move.  There is blood coming from his eyes, ears, mouth, head and various other places where bones are exposed.  His internal injuries are fair more severe than his horrible outwardly appearance.  The farmer who owns the property finds Clay and goes back inside to grab a blanket thinking it is best to cover the body.  He had heard the crash and it took a few minutes for him to get dressed, and then a few more to find the young man laying in the dark.  He saw the truck first, mangled, air bags deployed, clearly looking like it had rolled multiple times.  From the truck’s location, he searched for bodies and found one, Clay.  His wife called the police and when he returns to find Clay, his breathing is shallow, and he thought that the poorly lit corner of the highway had taken another life.  Police, fire, and ambulance arrive, and Clay is taken to the hospital.  Months later he is discharged from the hospital and on that day, he is served with a summons.  The police have charged him with stealing the truck and impaired driving.  Their theory is that Clay gets kicked out of the beer tent and goes to the truck.  Finding the spare key he drives the truck towards home.  He didn’t have permission to take the truck and was in no condition to drive given his impairment.  He misses a turn, rolls the truck, is ejected, and suffers serious and life-threatening injuries.  He attends my office for help.

Clay is still on crutches and going to the washroom through a tube into a bag attached to his body.  In fact, the case took over a year and half to finalize and it was only as we reached a result in the case that the colostomy bag was removed.  Clay can’t remember a thing.  He doesn’t know what happened.  This case would be up to us.  It would be up to us to recreate the incident and search for clues to try and figure out what happened.  Just like on TV, the defence lawyer would get to be the investigator.   It is probably better framed as the defence lawyer was forced to be the investigator given the blinders that the original investigators were wearing.

The disclosure from the police came in waves and something stuck out right away.  Both the farmer and what we thought to be the first officer on scene recall the chaos.  The severely damaged truck, the nearly dead kid, and the boots placed neatly atop a purse.  This stood out to both the trained investigator and the civilian on scene because it seemed odd that in all the chaos of a rolling vehicle, how could these boots be perfectly placed atop a purse.  It was odd, in my opinion a one in a million chance and thus likely not placed there by chance.  Perhaps it is the skeptic in me but the placement of the boots just didn’t sit right.  In my mind it put more people at the scene.  This leads to further disclosure requests.  Requests for the police to interview more witnesses, and a need to see the truck and the scene.  Once all disclosure was thought to be complete there were multiple things that stood out. The boots. The fact that Clay didn’t have the keys on him and they couldn’t be found anywhere at the scene despite an extensive search.  There was no blood in the vehicle that could be linked to Clay, or anyone else for that matter.  The truck smelt heavily of perfume.  With this evidence it was time to formulate an alternative theory of events.  Clay still didn’t remember a thing, so the evidence would have to tell the story.  Of course the ex-girlfriend and all the other friends were distancing themselves from the truck.  They weren’t driving.  Clay never asked to take the truck.  Clay stole the truck.  Even though Clay lay dying in a field the so-called friends were holding tight on the fact that they were involved, but again, where were the keys and what about the perfume, purse and the boots?

The defence theory hit the team like a lightening bolt.  Clay wasn’t driving.  Clay wasn’t even in the truck, technically.  He was in the bed of the truck, laying down and passed out.  He had been kicked out of the beer tent and needed a place to go.  His ex had driven him there and he thought that she or better yet the designated driver, would get them home.  He waited in the bed of the truck, but the booze got the best of him and he laid down to sleep.  His position in the truck would not be seen by the person driving the truck.  We thought that the ex-girlfriend was driving but at this point it didn’t matter, because we knew Clay wasn’t.  He was passed out in the bed of the truck when the driver missed the curve, hit the ditch, rolled, etc.  Clay was ejected.  This became apparent to the occupants of the truck when the dust settled.  There was ample time for the other occupants to assess injuries and get away.  There was ample time to leave the scene and they did.  The defence theory was that Clay should not be the accused rather, he was the victim.  It was time for a trial.

The road to trial encompasses many other court appearances.  Arguably the most important pre-trial appearance is the Judicial Pre-Trial.  A time for the prosecutor, the defence lawyer and the Judge to sit down and discuss the case, all aspects, any potential for resolution, what the trial will look like and any way that the trial can be streamlined.  The defence theory was laid out at the pre-trial.  The boots, the purse, the keys, the perfume, the absence of blood despite the injuries received.  We seemed to gain some traction at the at the pre-trial because shortly after that, a package from the Crown’s office was delivered.  In it were further disclosure documents.  It seems that the Crown had done some digging in relation to our theory. My jaw dropped when I reviewed the notes.  I wasn’t all that shocked that an officer confirmed there were no keys for the truck found anywhere at the scene, we knew that.  What shocked me the most was the set of notes from the legitimate first officer on the scene.  The officer that we thought was first on scene was not actually first one scene.  This officer also saw the boots, but this officer also saw tire tracks that were fresh.  The tire tracks that were entering the field and then exiting the field.  This officer saw the tire tracks of the getaway vehicle.  For some reason no one had asked to see this officer’s notes.  Our request for disclosure are fulsome but you don’t know you don’t have something that you didn’t know existed.  There was no indication anywhere of this other officer.  The defence team would have no notes, the notes we had were cross-referenced with the witness list and we seemed to have them all.  The Crown had what we had and so it was likely they didn’t know either.  The police sure as hell did though, and it wasn’t until inquiries were made that they came out with them.  The notes were the nail in the coffin for the Crown’s case.  The boots, the purse, the lack of blood and keys, the perfume, and now the tire tracks.  Clay wasn’t the driver. He was the passenger.  He was the victim, and he was left to die in a field while his so-called friends fled.  One phone call to the Crown following the review of the newfound notes and the case was brought into court to be withdrawn.  An absolute withdrawal.  Clay was able to walk, and he walked out of the courtroom a free man.

It was a bittersweet victory.  Hard work and dedication to the client paid off but, in the end, Clay never got the justice he deserved.  No one was held accountable.  No new charges were laid.  The driver goes free, and Clay is the only one that paid the price.  I am proud of this case.  Against all odds the power of the state was checked and laid to rest.  This case illustrates that being charged is only the unfortunate beginning, and not all charged individuals are guilty individuals.  As someone charged with a criminal offence, you are innocent until the prosecutor proves you guilty beyond a reasonable doubt.  This is why we defend.